Welcome to World Wine Watch. A new news service keeping you up to date on events in the global wine industry.
If you have any news tips or suggestions, please email nicki@worldwinewatch.com

Nicki BourlioufasJanuary 30, 2021
A survey by World Wine Watch reveals most men don’t feel less ‘manly’ drinking bubbles in front of their peers, though two in three men only enjoy sparkling wine in the company of a woman while some buy Champagne to show off their spending power and splash out on Cristal.

Tell us when you pop a cork in this short here.

Nicki BourlioufasJanuary 20, 20211
A ranking of the world's most valuable wine brands is led by Moët & Chandon, followed by China's Changyu. LVMH's Chandon and Veuve Clicquot join in at third and fourth place.

Nicki BourlioufasDecember 3, 2020
Shares in Australia’s largest wine producer, Treasury Wine Estates (TWE), have recovered slightly after the company was hit with a temporarily 169% tariff on its wine exports to China, as TWE seeks to sell its surplus wine elsewhere, make more wine in France or potentially China to avoid the tariff which will kill its Chinese sales.

Nicki BourlioufasNovember 11, 2020
Shares in Australia's largest wine producer, Treasury Wine Estates (TWE), fell to their lowest level in five years this week on possible tariffs or bans being placed on its exports to China. The company has also paused on a demerger of its famous Penfolds brand, to focus on boosting its operations.

The Bordeaux Chauvinist reviews a white

More in the US turn to bubbles

Nicki BourlioufasOctober 8, 2020
The number of sparkling wine drinkers in the US is growing, with a 17% increase in the number of monthly drinkers since 2018, with US drinkers increasingly favouring Italian wines, though they turn to Champagne for quality, according to a report.
Tell us whether you prefer French, Italian or Australian bubbles here.

Nicki BourlioufasOctober 5, 2020
South Korea is being put forward as a top wine market for winemakers to target, second only to the US and ahead of China, having survived COVID-19 comparatively well with wine consumption expected to rise robustly, according to Wine Australia.

Nicki BourlioufasOctober 1, 2020
With July the driest month on record in Champagne, producers will have less grapes with which to produce the region’s famous wines. But according to the vineyard director at Taittinger, there were positives from the drought too, with less mould and mildew to harm fruit.

Nicki BourlioufasOctober 1, 2020
As fires rage in the Napa Valley and threaten US wine production, the drought has worsened in France, with more areas reaching 'crisis' level water restrictions in September after the warmest European winter on record, as households and farmers face severe water restrictions.

Moët to flow back onto Australian shelves

Nicki BourlioufasSeptember 23, 20201
A battle between Australia’s largest liquor retailer and France’s LVMH, which led to supply shortages of the world’s famous Champagnes Moët & Chandon and Veuve Clicquot at its stores, has been settled.

Nicki BourlioufasSeptember 20, 2020
One in two Chinese wine drinkers and almost one in three Australians buy their wine online, followed by 25% in the US, according to new research, with the level of internet shopping boosted by COVID-19.
Are you are drinking more in COVID here.

Nicki BourlioufasSeptember 16, 2020
This year’s Champagne grape quality was 'excellent', in part thanks to the severe drought in France. But global warming is challenging winemakers to maintain finesse and keep down alcohol levels.
Do 'real' men drink Champagne? Tell us what you think here.

Nicki BourlioufasSeptember 15, 2020
Wholesale red and white wine prices have dropped in France since March given the impact of COVID-19, while values have rebounded in Spain in recent months, according to data from the European Commission.

Nicki BourlioufasSeptember 14, 2020
Many people have turned to alcohol while more people are drinking alone during the Covid-19 pandemic after being forced to stay at home, according to the latest Global Drug Survey, the world's largest annual drug survey.

Nicki BourlioufasSeptember 9, 2020
Australia might be in recession, but official alcohol sales are soaring and - but very few Australians admit to drinking more.

Gasly finally gets to enjoy the Champagne

Nicki BourlioufasSeptember 7, 20205
As Pierre Gasly recently celebrated his F1 victory in Monza – the first Frenchman to do so since 1996 – the Champagne cork was popping hard on the podium. But with which Champagne brand was Gasly celebrating?

Women most likely to drink more in COVID

Nicki BourlioufasSeptember 5, 2020
Consumers are increasingly drinking wine outside mealtimes, and the trend has gained momentum since the height of COVID-19 lockdowns, according to the latest data from a UK research firm.

Nicki BourlioufasAugust 31, 20202
China has begun an anti-dumping probe into Australian wine imports. Australia is now the biggest importer of wine into China, having overtaken France in 2019.

Nicki BourlioufasAugust 14, 2020
Australia's largest listed wine company says its net profit has dropped 25% to $315.8, but a Chinese sales recovery has helped lift the company's shares to their highest in months as it restarts VIP wine dinners in China.

Drinking can raise chances of COVID-19

Nicki BourlioufasAugust 7, 20201
The WHO has recently produced a factsheet on alcohol consumption and COVID-19, which provides a sobering reminder not to drink too much.

Nicki BourlioufasAugust 5, 20201
By Nicki Bourlioufas The Australian winegrape crush in 2020 was 1.52 million tonnes – the lowest since 2007 given the impact of drought and bushfires, according to the National Vintage Report 2020 from Wine Australia. The 2020 crush was 12 per cent lower than the 2019 crush, and 13 per cent below the ten-year averageRead More

Nicki BourlioufasAugust 5, 2020
By Nicki Bourlioufas Wine sales in full-service US restaurants and bars will not return to 2019 levels until after 2022, creating huge financial pressures for wine suppliers, according to Rabobank’s Quarterly Wine Report for the second quarter. Covid-19 containment measures in the US, such as lockdown orders and social distancing, have pummelled on-premise wine sales.Read More

Wine in a can? Pour it please.

Nicki BourlioufasJanuary 30, 2020
Wine being sold in a can is increasingly making an appearance on liquor shop shelves. While Australians prefer their wine in a glass, well-known brands are increasingly appearing in a can and a broad range of wines has seen big growth in canned wines available in Australia.

Bordeaux Chauvinist gets lost in Beaujolais 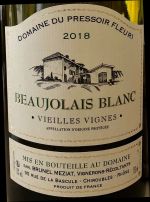